Scout Report: Can Patrik Schick Lead the Line for Leverkusen? 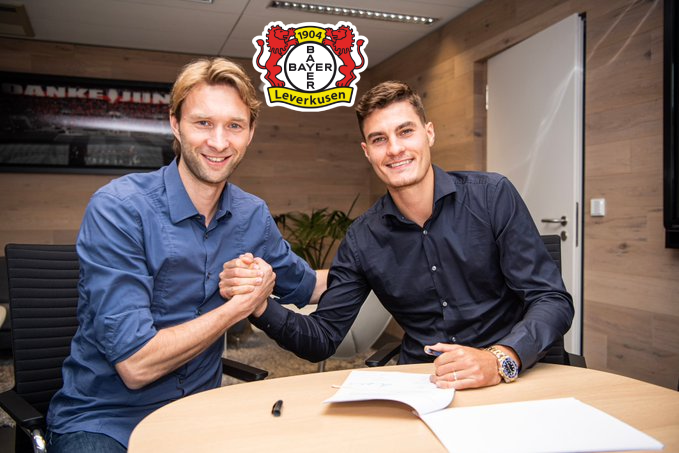 Patrik Schick has joined Bayer 04 Leverkusen from AS Roma for around €29 million including bonuses, signing a contract that will keep him at the club for five years. After spending the previous campaign on loan at RB Leipzig, he is set to make a return to the Bundesliga with Leverkusen since Die Rotten Bullen failed to sign him permanently.

The 24 year-old started his career with Sparta Prague, debuting for the Czech outfit in 2014. After a season-long loan at Bohemians in 2015/16, he was sold to Sampdoria, who moved him on to Roma after another campaign. The striker then spent two years at the Italian capital, before moving once again – this time to RB Leipzig for the 2019/20 season.

Now, he has joined Bayer Leverkusen on a permanent transfer, so let’s take a look at what he brings to the table…

At 6′ 1″, Patrik Schick is tall enough to be used as a sole striker, but he can also play as a second striker or a target man. He is capable of holding the ball up and waiting for his teammates to join the attack, but can also take it forwards himself with his excellent technical ability. Overall, he is a complete striker who can take on various roles in that position.

One of Schick’s greatest strengths is his ability to use his frame and physique to his advantage. He won 2.5 aerial duels per match on average last season, and was dispossessed only 0.6 times and competed 0.8 dribbles in the same period.

Adding to his qualities as a target man is his link-up play – the striker maintained a very high passing accuracy of 72.4%, while also making nearly 1 key pass per game.

His finishing is not bad either, as he scored 10 goals in last season’s Bundesliga with a shot conversion rate of 18.9% while averaging 2.4 shots per appearance. His height comes into the picture too, as 40% of his goals last season came from headers, 3 of which came from set-pieces.

He showed his aerial prowess in his side’s 2-4 away win at Köln.

With the score at 1-0, notice how Schick gives himself a little bit of space to get a superior run on his defender.

Then, when Angeliño delivers the cross, he is able to jump highest and head across goal, equalising for his side.

He has been doing this throughout his career, and there’s no indication of him stopping at Leverkusen.

There isn’t too much wrong with Patrik Schick’s game – he’s agile, strong and physically imposing. But if there’s one aspect where he’s not the best, that is speed. The Czech international is no slouch, but a top speed of 31 km/h will not be enough to burst through defences on counterattacks.

Another small aspect that he can improve on is his defensive work-rate. The striker only made 0.4 tackles and interceptions per match in the Bundesliga last season, covering 7.2 kilometres in the process. A little more hard work there will help Leverkusen’s pressing game.

These aren’t any glaring weaknesses that opponents can exploit, but if he can work on his defensive involvements in particular, he will become an even more complete package.

Quite simply, Patrik Schick is being brought in at Leverkusen to be their main striker.

Die Werkself have lost Kai Havertz and Kevin Volland to Chelsea and Monaco respectively in the transfer window, so they only have Lucas Alario (who may or may not be leaving as well) as a proper number 9 now. While he isn’t incapable of leading Leverkusen’s attack in any way, Peter Bosz wouldn’t mind bringing in some competition.

He can use his hold-up play to chase down and contest long balls, bringing the pace of Moussa Diaby and Leon Bailey into the mix to support him in attack. To add to that, he can be their target man when it comes to set-pieces, troubling stronger opposition in such aspects.

The only area where Schick may not be the best option is when Leverkusen are looking to counterattack. As aforementioned, he isn’t the quickest, so he may not be able to get on the end of such moves.

This looks to be a sensible signing on Leverkusen’s part, who have immediately reinvested a part of the money they got from selling Havertz and Volland in order to get a replacement. Schick proved that he was fully suited to the Bundesliga during his time at RB Leipzig, so he too will be happy to return to the German top-flight.

On paper, it is clear that Patrik Schick has all the capabilities to be Leverkusen’s frontman in attack.

Player Analysis: Can an ageing Vedad Ibišević bring goals to Schalke?
Under the Microscope: Angeliño’s Loan Spell at RB Leipzig