Freiburg, who were sporting a limited edition charity kit, welcomed Gladbach to the Schwarzwald-Stadion, with both sides looking for a win to boost their European Qualification hopes. 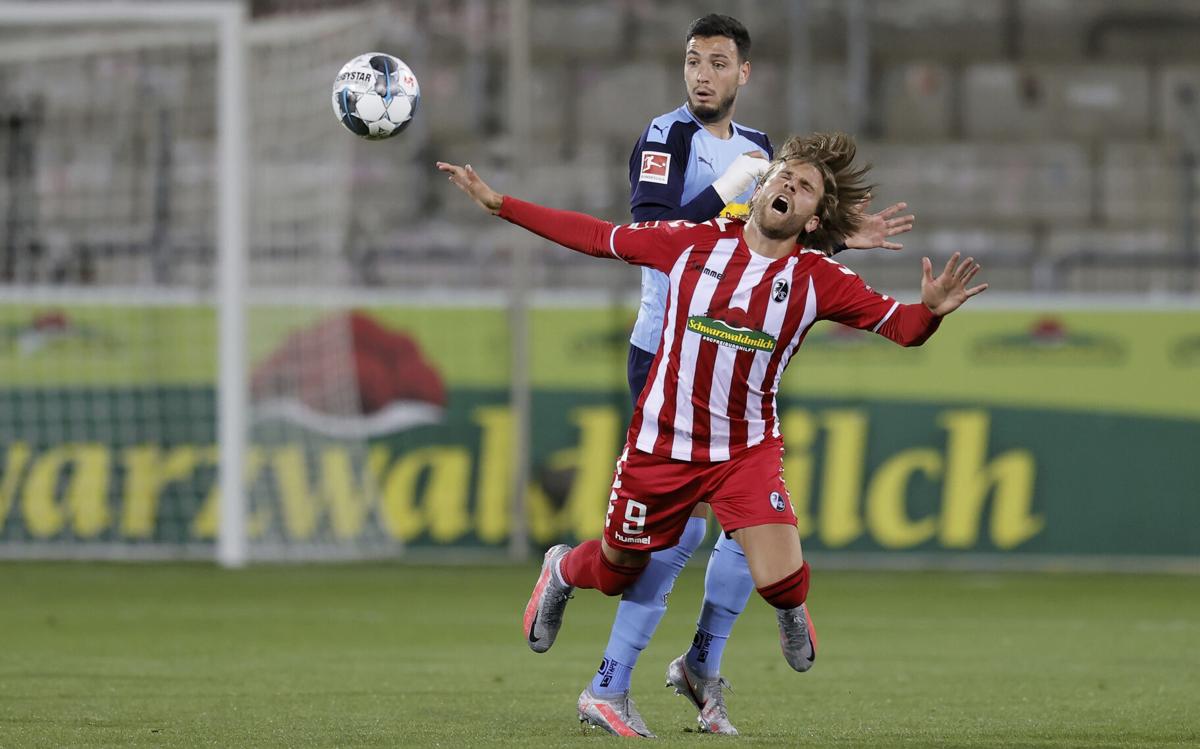 Gladbach dominated possession in the first half, and had truckloads of chances, but they failed to convert.

Freiburg were defending for most of the half, and could only manage a couple of half-decent chances.

The away side almost went in front, when Neuhaus burst through, but he had his shot saved. It fell to Herrmann, whose shot was deflected into the net by Neuhaus, but the midfielder was offside.

Höler had a massive chance at the end of the first half, but he could only manage to sting Sommer’s gloves.

The second half saw more of the same. But things changed when Petersen headed Grifo’s free-kick home, with his first touch after coming on as a substitute.

Freiburg started getting better thereafter, as they forayed forward more often. But for the Foals, things got even worse when Pléa was sent packing after he picked up a needless second yellow card.

Freiburg created a few decent chances thereafter, but failed to take any.

In the end, it was Freiburg’s defensive resolution which decided the match, as it ended 1-0 to the hosts.

Freiburg were set up to sit very deep, and tried to threaten Gladbach on the counter.

Gladbach did the opposite they maintained possession, and looked to go wide before crossing low and hard, mainly through Bensebaini.

Freiburg were very compact centrally, and that’s why Gladbach failed to score.

Things went downhill after the red card for Gladbach, as they couldn’t play through Freiburg anymore, due to their numerical disadvantage.

Alexander Schwolow – Magnificent display from the German keeper. He made a ton of saves, and his distribution was good too. 7.75.

Lukas Kübler – Did decently well at right-back to prevent Thuram from getting in behind. 6.5.

Philipp Lienhart – Repelled almost all of the crosses that came into his box. A rock in defence. 7.75.

Dominique Heintz – He was solid at the back, as he battled hard to earn his side a clean sheet. 7.5.

Christian Günter – Did well to contain Herrmann for most of the match. 7.

Robin Koch – Did very well in holding midfield, as he prevented Gladbach from steamrolling through his side. 6.5.

Nicolas Höfler – Worked extremely hard to assist his side in defence. 6.75.

Roland Sallai – Did well to battle in midfield, but he failed to make much happen. 5.5.

Vincenzo Grifo – Decent down the left, as he strung his side’s counterattacks together. Got a great assist for the goal as well. 6.75.

Luca Waldschmidt – Had one major chance in the first half, which he skied high. Grew into the game in the second half, but lacked end-product. He worked very hard, though. 6.75.

Lucas Höler – His hold-up play was great, and he also helped his side in defence. He was very industrious throughout the match. 7.25.

Subs:
Nils Petersen – The most prolific super-sub in Bundesliga history was at it again, as he scored within 67 seconds of coming on, with his first touch, of course. 6.75.

Jonathan Schmid – Strong defensively since he came on. 6.25.

Team – Freiburg fought resiliently to earn this win. They were under constant pressure in the first half, but they held fort well. They got better in the second, and after the goal and red card for Pléa, they were the better side. A brilliant performance to boost their European hopes. 7.25.

Yann Sommer – Made a few crucial saves, and his distribution was good too. But he failed to keep a clean sheet. 7.25.

Stefan Lainer – His crossing was brilliant, as he delivered a lot of teasing balls. But no one was able too convert them. 7.

Matthias Ginter – Didn’t have much to do all game, but he did his job at the back. 6.5.

Ramy Bensebaini – Made lots of darting runs down the left, and his crosses were not bad either. 6.75.

Jonas Hofmann – He was decent in midfield, as he assisted Neuhaus in creating. 6.25.

Florian Neuhaus – Dictated play through midfield, and was everywhere throughout the match. His passing and dribbling in particular were exceptional. The only thing he lacked was a goal, as he missed two big chances. His influence waned in the second half, though. 7.5.

Patrick Herrmann – Worked very hard down the right, and had a couple of decent chances too. 6.5.

Lars Stindl – Was ever-present in attack, as he made a lot of runs to arrive late on the edge of the box. His shots were very dangerous too. But his mistake allowed Petersen to score. 6.75.

Marcus Thuram – Was good in possession, but failed to do anything in front of goal. 6.

Alassane Pléa – Did well to string his side’s attacks together, but let his side down when he picked up a red card. The second yellow was fine, but the first yellow card he picked up was completely and utterly needless – for flicking the ball away. 5.25.

Team – Gladbach were by far the better side in the first half, as they had an array of chances. But their failure to take any of them proved costly. After conceding in the second, Pléa picked up a needless red card, which is where the game was lost for them. Just like the match against Bremen, they failed too break a resolute defence down. This result will certainly dent their Champions League hopes. 6.25.

Markus Schmidt – Got all his calls right, as he dished out 8 cards, including a double yellow for Pléa, and a straight red for Max Eberl of all people. Didn’t make any wrong decisions in all fairness, though. 7.5.

Max Eberl – The Gladbach Sporting Director was sent off as well, immediately after Pléa saw red, for the interesting words he chose to communicate with the fourth official. 3.5.

Freiburg stay 8th, but move to within a point of Wolfsburg, who are 6th. Their Europa League challenge may well and truly be on.

Gladbach don’t move either, as they stay 4th, but after Leverkusen’s match against Bayern, they could drop down to 5th.