Leipzig hosted Dortmund for their last home match, one which could decide the runners-up for the season. 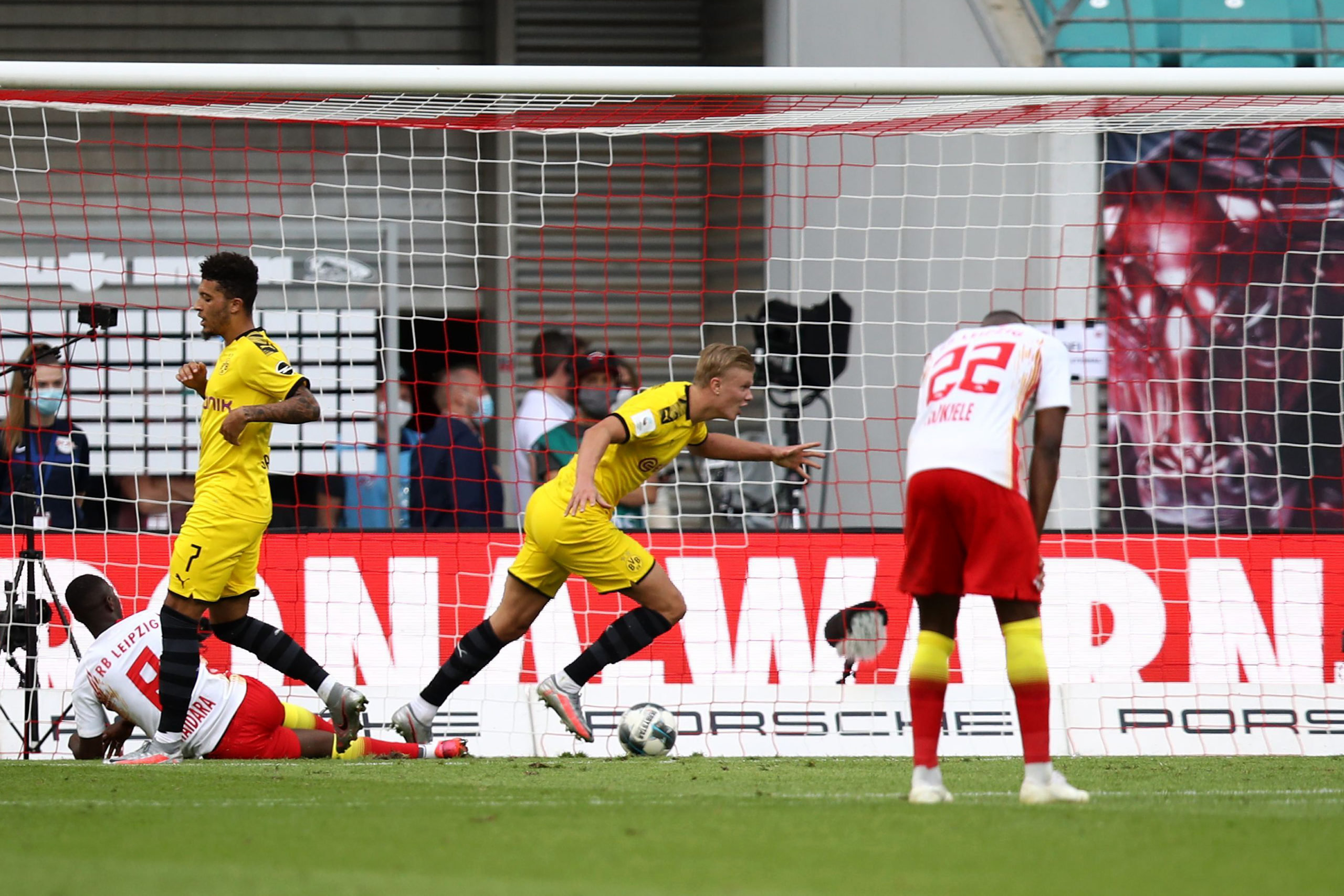 Dortmund had the first big chance in the 12th minute, when Guerreiro cut a ball back to Hazard on the edge of the box, but the Belgian only managed to put it wide.

A couple of minutes later, Hazard found Håland, who could only draw a save out of Gulácsi. A minute later, the same situation reoccurred, and the outcome wasn’t different either.

In the 25th minute, Hummels found Hazard with a beautifully chipped ball, but the winger smashed his volley straight at Gulácsi, who managed to repel it.

Finally, Dortmund broke through at the half-hour mark. Brandt ran down the wing, and found Reyna with a cross. The youngster nudged it on to Håland, who convincingly beat Gulácsi this time.

A minute after half-time, Håland played Morey through with a square ball, but the youngster squandered his chance by putting it wide.

Five minutes later, Håland was through again. He slipped it through Gulácsi’s legs, but the keeper got a slight touch to it, and went out off the bar.

With the last kick of the game, Håland bundled Brandt’s cross home, and made it 0-2 to the visitors.

Leipzig deployed a back 3 to try to deal with Dortmund’s star-studded front-line. However, they took a while to get settled, and conceded a few chances. And, at half time, they switched to a back 4.

Because of these tactics, Dortmund looked to their wingers to provide width, and stretch Leipzig’s defence. They looked to threaten Leipzig on the break as well.

Péter Gulácsi – Made quite a few great saves as he kept his side in the match. 7.25

Lukas Klostermann – Failed to do anything to prevent Dortmund from getting a lot of chances. 4.5

Dayot Upamecano – Alright at the back, as he made some decent challenges. 6

Marcel Halstenberg – Tried his best to keep Håland in check, but let a lot of chances go past him. 5.5

Nordi Mukiele – Did very well defensively to keep Hazard in check for most of the game. 6.75

Marcel Sabitzer – Decent in midfield, but he didn’t help defensively. Picked up an unfortunate injury in the first half too. 5

Kevin Kampl – Failed to do anything to prevent Dortmund steamrolling through midfield in transition. 4.75

Angeliño – Looked threatening at times, especially in the second half, down the left as he went forward often. This had some side-effects too, like when he was caught out before the goal. 6.5

Emil Forsberg – Good in attacking midfield, as he created a few chances for his side. 6.25

Timo Werner – Had very little to work with in his last home game for Leipzig. 4.5

Patrik Schick – Got little to no service, and therefore couldn’t have an impact. 4.5

Amadou Haidara – Failed to do too much in midfield after coming on. 4.75

Tyler Adams – Decent in midfield, but he had no effect on either end. 5

Christopher Nkunku – Had no impact after he was brought on. 4.25

Dani Olmo – Looked decent down the right after he came on, but he failed to threaten the goal. 6

Team – Leipzig did not look sharp for most of this match, and deserved to lose. They conceded a lot of chances in the first half, and were lucky to only ship one then. There was a spell in the second half when they looked better, but didn’t create any openings. They looked very unorganised in their new system too. 5.5

Roman Bürki – Had little to do, but he did his job when he was called into action. 6.25

Łukasz Piszczek – Good at the back, as he made a few good blocks and tackles. 7

Mats Hummels – An absolutely brilliant performance from the German. He was solid defensively, and his distribution was great too, as he started a lot of his side’s counter-attacks. Started the moves for both the goals as well. 8.25

Emre Can – Decent at the back, as he helped his defensive compatriots in keeping things tight. 6.5

Mateu Morey – Good down the right, where he worked hard. Had a great chance to score as well, but he put it wide. 6.5

Axel Witsel – As always, his distribution was great. Didn’t have too much defensive work to do either. 6.75

Julian Brandt – Great in midfield, and did well up ahead too. Was instrumental in the build-up to the opener. Got a great assist too 7.75

Raphaël Guerreiro – Decent down the left, and he defended well too. 6.5

Giovanni Reyna – Looked decent up ahead, and set up Håland very well for the opener, with an unselfish pass. 6.5

Erling Braut Håland – Had quite a few chances, and could have even had 5. Only managed two, though. Created a couple of decent chances too. 7

Thorgan Hazard – Not too inspiring in attack, as he failed to do too much. 5.75

Jadon Sancho – Didn’t make too much after coming on. 5

Team – Dortmund bounced back brilliantly after the shocking defeat to Mainz. They created a lot of chances early on, and should have more than one goal in the first half. They withstood Leipzig’s pressure in the second half as well, and capped it off with a late goal. Great display from them. 7.25

Felix Zwayer had a relatively easy day, and he got most of his calls correct. 7.25

Leipzig stay 3rd, and only have a point’s buffer over Gladbach. They still need a point to secure Champions League football for next season.

Dortmund have established a 6 point lead over Leipzig in second, and are guaranteed the runners-up spot for this season.