Gladbach hosted Wolfsburg at Borussia-Park, with both sides’ European hopes riding on this fixture. 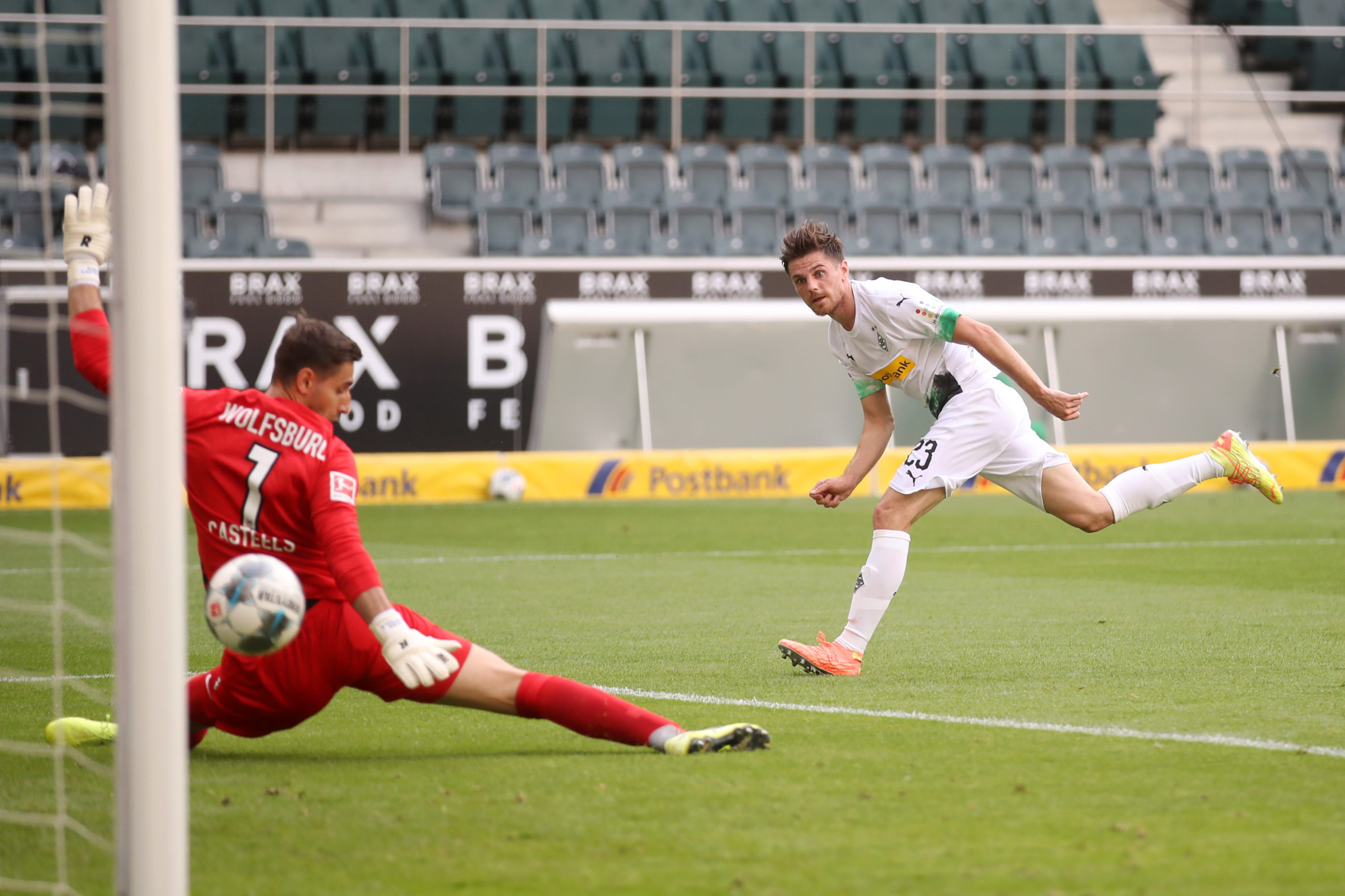 Gladbach started well, and put Wolfsburg under good pressure. But they got their reward through a counterattack in the 10th minute, when Embolo wriggled past two, before finding Hoffman, who put it past Casteels.

The Wolves were better thereafter, but they found themselves 2 goals down in the 30th minute, after Ginter rolled a ball onto the path of Hoffman, who beat Casteels for the second time.

The Foals had one more chance in the first period through Traoré, who was through on goal, but he could only manage to put it wide. So, it was 2-0 at the break.

Hoffman had a big chance to complete his hat-trick in the 56th minute, but he dragged it wide.

Gladbach looked to build from the back as always, but they didn’t shy away from breaking whenever they could.

Wolfsburg pressed in the midfield with good intensity, and recovered the ball quite often there. The problem was that they were very slow and loose on the ball, which is why they couldn’t threaten the Gladbach goal too often.

Yann Sommer – Faced a few shots, but all of them were easy saves. Good on the ball too. 7.25

Stefan Lainer – Industrious down the right flank as always, as he went up and down the wing in attack. His passing was great too. 7.5

Matthias Ginter – Solid at the back, and got a great assist for the second goal. 8

Nico Elvedi – Kept Weghorst in check for most of the match, and was brilliant at the back. 7.75

Oscar Wendt – Strong down the right, as he kept Mbabu under control. 6.75

Christoph Kramer – Screened his defence well, and was good on the ball. 6.5

Florian Neuhaus – Did well in midfield, as he strung his team’s attacks together. 6.75

Jonas Hofmann – Got two goals with two great finishes, and was very close to completing a hat-trick. Did well in attack though. 8

Lars Stindl – Decent in attack, and got a good goal too. 7

Ibrahima Traoré – Had a big chance at the end of the first half, but he failed to put it on target. Worked very hard though, and got a great assist for the third goal. 7.75

Breel Embolo – Got a very good assist for the opener. Worked very hard in attack too, as he was all over the pitch and made a few threatening runs. His ball control and passing were exceptional as well, and he rarely lost the ball. 8

Patrick Herrmann – Didn’t really have any impact after he was brought on. 4.5

Keanan Bennetts – Nice to see him get his debut. 5

Team – Gladbach had 5 major chances, and they converted 3 of them. They also cut off Weghorst’s supply, and were solid defensively. It was a great performance from the Foals, and they thoroughly deserve this win. 7.75

Koen Casteels – Faced three shots on target, and saved none of them. He can’t be blamed, but he did nothing but concede the goals. 4.5

Kevin Mbabu – Saw a good amount of the ball down the right, but couldn’t make much happen. 5

Marin Pongračić – Decent at the back, as he made quite a few crucial challenges. Almost got sent off too. 6.25

John Brooks – His passing was really poor, and failed to stop the Gladbach forwards. Won a few important headers though. 6

Renato Steffen – Saw a bit of the ball as he tried to hold out in midfield. 5.5

Yannick Gerhardt – Failed to make too much happen in midfield. 4.5

Maximilian Arnold – Saw a lot of the ball as he strung his side’s attacks together from midfield, but made a lot of mistakes. 4

João Victor – Threatened a bit with his dribbling, but he lacked confidence. 5.75

Xaver Schlager – His passing was decent, but he failed to create any chances. 6

Felix Klaus – Saw a bit of the ball down the left, but failed to do too much. 5.5

Wout Weghorst – Received no service up front, and therefore was ineffective. Worked very hard though. 5

Josip Brekalo – Saw a bit of the ball after coming on, but failed to have an impact up front. 5.75

Josuha Guilavogui – Did nothing after being brought on except picking up a yellow card. 4.25

Omar Marmoush – Was a fresh burst of energy for his side, but he failed to threaten the goal. 6

Robin Knoche – Had no impact after coming on. 4.5

Daniel Ginczek – Had a chance or two, but failed to make them count. 5.75

Team – This was an uncharacteristically poor performance from Wolfsburg. They were shaky in defence, and weak in attack. Their passing in particular should be brought into question. Because of that, they left Weghorst chasing shadows for most of the match. They have a lot to work on if they want to hold on to their European spot. 4.75

Robert Schröder had one or two tough calls to make, but he got them right, so he’ll be a happy man. 7.5

Gladbach go back up to 4th place, two points clear of Leverkusen, who have a game in hand.

Wolfsburg stay in 6th place, and are a point ahead of Freiburg.