The 32nd matchday of the Bundesliga is the last time that these teams will play at different times, as all fixtures of the last two matchdays will kick-off simultaneously. Here’s a look at what we can expect from the midweek matches. 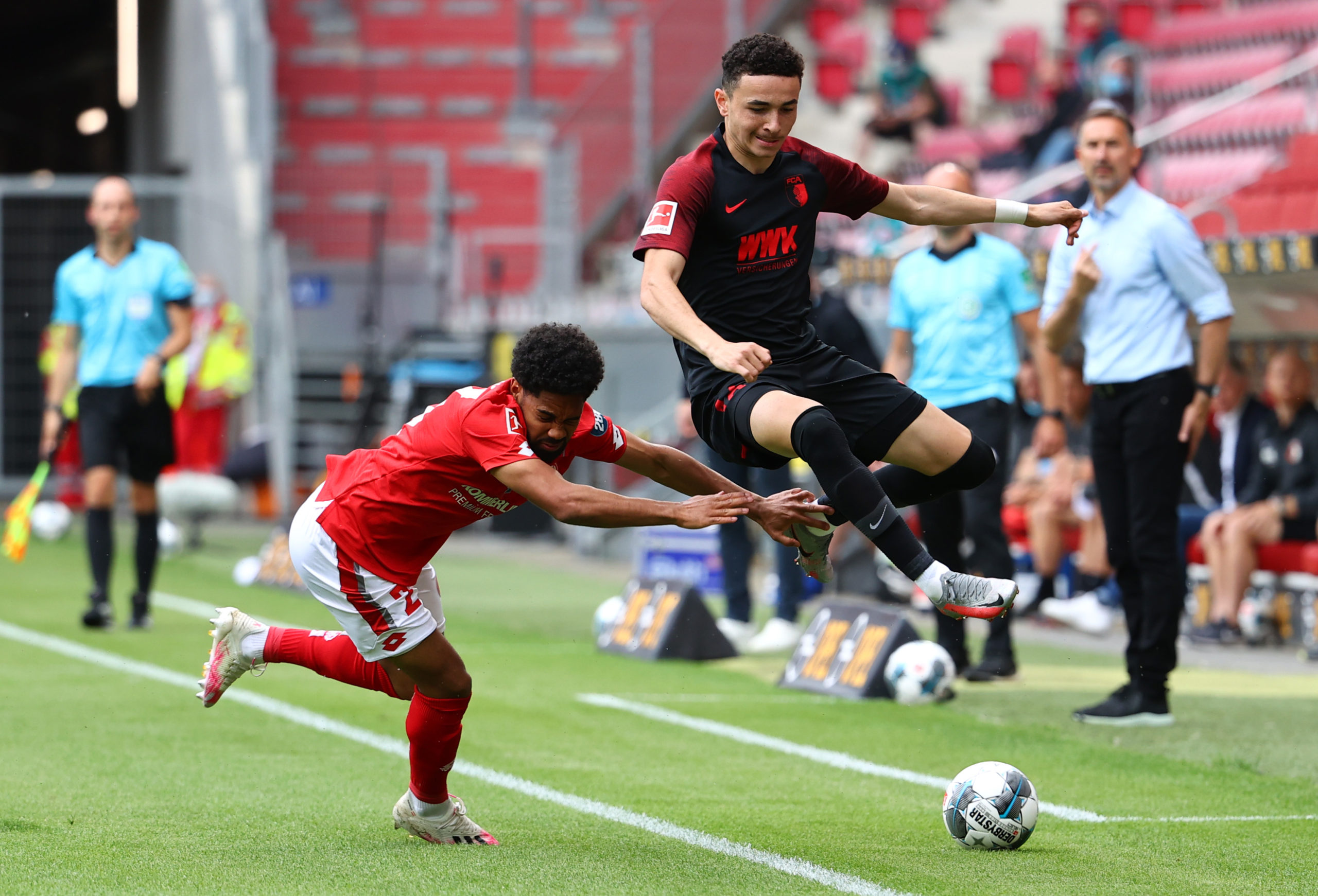 5th-placed Gladbach will face Wolfsburg, who are sixth, for the first match of the week. Though the sides border each other on the table, there are 10 points between them – meaning that Wolfsburg cannot possibly finish above the hosts, no matter what calamities they may face.

What This Could Mean: A win will put Gladbach back up to 4th, and in contention for the Champions League, albeit only until Leverkusen play. Three points for Wolfsburg would help them forge a six-point gap to Hoffenheim – moving them closer to a spot in the Europa League

Last Results: Gladbach lost 2-1 to the champions, Bayern Munich on the weekend. However, the Foals’ performance was not bad, as they frustrated the league-leaders for over 80 minutes. Wolfsburg also conceded a couple of goals against Freiburg, but they also managed to score the same number, so they took a point away.

Player to Watch: Wout Weghorst- The Dutch Striker got a brace in the draw against Frankfurt, and it was VAR which kept him away from his hat-trick. After 4 games without goals, he has 3 in 2 matches. The Wolves will need him to keep up his prolific goal-scoring form.

17th-placed Bremen host the league-leaders, Bayern at the Weserstadion. The hosts will surely be looking for crucial points to help them in their relegation battle.

What This Could Mean: Die Grün-Weißen can move up to 16th place with a win or draw (they are level on points with Fortuna now) – putting themselves out of the immediate drop-zone. Goal-difference will also be crucial in that regard, so they should try to not get battered. The Champions would love to win too, as they can seal the record eighth-consecutive Meisterschale.

Last Results: Bremen put 5 past Paderborn on Saturday, giving their survival hopes a much-needed boost. Bayern also won, 2-1 against Gladbach, where they looked rather blunt in attack without Lewandowski and Müller, who will be back for this fixture.

Player to Watch: Davy Klaasen– The Dutch midfielder bagged a brace in the win against Paderborn, and has been thriving in his attacking role. He will carry Bremen’s attacking hopes against Bayern.

What This Could Mean: 3 points can take Freiburg up to 7th-place, and into a Europa League place. Hertha will also move up with a win – up to 9th place.

Last Results: Die Breisgau–Brasilianer (Breisgau Brazilians) played out a 4-goal draw with Wolfsburg on Saturday. At the same time, the Berliners were thrashed 1-4 by Frankfurt, after Boyata saw red.

Player to Watch: Vincenzo Grifo – The 27 year-old looked good on the weekend, where he got an assist and was instrumental in his side’s attacks. Freiburg will look up to him for a similar performance to beat Hertha.

14th-placed Union host bottom-club Paderborn for an exciting match at the bottom of the Bundesliga table.

What This Could Mean: A win for Union will ensure their survival in the Bundesliga, and it will take them 2 places up, to twelfth spot. As for Paderborn, things look grim. Failure to win will see them officially relegated, and if either of Fortuna or Werder win their game, they cannot stop the drop.

Last Results: Die Eisernen beat Köln with a scoreline of 2-1 on Saturday. Meanwhile, Paderborn were busy getting thrashed by Bremen, as they lost 1-5.

Player to Watch: Marvin Friedrich – The defender was solid against Köln, and he even got a goal for his side. Paderborn’s forwards are not known to strike fear into defenders, so he should be more than capable of keeping them quiet.

10th-placed Frankfurt will take on Schalke, who are a place and a point above them, on Wednesday’s early kick-off, with both sides looking to make a last-gasp run for Europe

What This Could Mean: The hosts can jump over Schalke with a win, and move to within two points of Europe. The Royal Blues will stay 9th with a victory, but will be level on points with Freiburg, and a mere point away from 7th spot.

Last Results: The Eagles soared past Hertha on Saturday, as they won 1-4. The visitors played the next day, and could only manage a 1-1 draw with Leverkusen – extending their winless run to 13 Bundesliga matches.

Player to Watch: André Silva – The Portuguese striker bagged a brace and an assist against Hertha, and he has 6 goals in 7 Bundesliga appearances since the restart. He’s in fine goalscoring form, and will look to add to his tally against a Schalke defence that hasn’t kept a clean sheet in 10 games.

Runners-up Dortmund face relegation-threatened Mainz, who are 15th, at the Signal Iduna Park

What This Could Mean: Dortmund may well have lost the title by the time they play, because a win for Bayern would hand it to them. They have also cemented a spot in the Champions League for next season, so the only thing they have to play for is second place, and a win would help them in that. The visitors have a lot to play for though – a win can take them 6 points clear of the relegation battle.

Last Results: The hosts won 0-1 against Düsseldorf thanks to a late goal on Saturday. The next day, Mainz lost a crucial relegation six-pointer against Augsburg because of a solitary goal.

Player to Watch: Erling Braut Håland – The Norwegian was back after a minor injury, and he got the late goal off the bench, helping his side beat Fortuna. If he starts, Mainz will face lots of problems.

3rd-placed Leipzig face 16th-placed Fortuna in a crucial match for both teams.

What This Could Mean: Three points for Leipzig will effectively guarantee Champions League football for them, as Gladbach will need to overturn a deficit of 6 points and 25 goals in two matchdays. Fortuna will also like to win, because that will put them three points clear of the immediate drop-zone.

Last Results: Leipzig beat Hoffenheim 0-2 last weekend, when Fortuna lost 0-1 to Dortmund in a cruel match, where they struck the post twice.

Player to Watch: Dani Olmo – The former Dinamo Zagreb man got a brace against Hoffenheim, and seems to have finally found his goal-scoring boots, as he has 3 goals in his last 3 Bundesliga outings, after only managing one in 7 games.

4th-placed Leverkusen face 12th-placed Köln, looking for points to help them bring Champions League football to the BayArena next season.

What This Could Mean: Die Werkself can extend their lead over Gladbach to 4 points depending on what the Foals can do in their match. As for Köln, they can guarantee their survival if they win this fixture.

Last Results: The hosts managed a 1-1 draw with Schalke on Sunday. A day before that, the Billy Goats passed on the chance to ensure survival, as they were beaten by a scoreline of 1-2 by Union.

Player to Watch: Kai Havertz – He was back in the starting lineup on the weekend after some slight injury concerns, but he couldn’t do anything in front of goal. He will look to change that against Köln, who should be very careful of him.

What This Could Mean: Like Köln, Augsburg can defend their Bundesliga status with a victory, but Hoffenheim will be no pushovers, as they will look for their first win under new management, which might see them go level on points with Wolfsburg, if the Wolves lose.

Last Results: Die Fuggerstädter won a crucial match against Mainz thanks to an early goal on Sunday. The away side played on Friday, when they lost 0-2 to Leipzig at home.

Player to Watch: Florian Niederlechner – He finally broke his 10-match long goal-drought with the crucial winning goal on the weekend, and he will look to get back into scoring form to ensure his side’s safety with a win.

The relegation battle and European runs will start coming to a close in the next few days, and by tonight, the record eighth-consecutive title could be in Bayern’s hands. But it is football, and you never know, so stay tuned for this matchday of the Bundesliga.