Bundesliga Matchday 30 Preview: Relegation Battles in the Heat of June

The 30th matchday of the Bundesliga will be the first time in over 25 years that the German league will host a matchday in June. Let’s take a quick look at the fixtures. 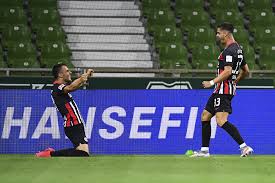 8th-placed Freiburg play on Friday for the second week in a row, and they host 4th-placed Gladbach, with both sides looking for three points to fuel their European ambitions.

What This Could Mean: A win wouldn’t change Freiburg’s position in the table, but they would move to within a point of 6th-placed Wolfsburg. If the foals win, however, they would move up to 3rd, albeit until Leipzig play.

Player to Watch: Marcus Thuram – The man simply fails to stop scoring. He bagged a brace last weekend, with his fellow countryman and partner in crime, Alassane Pléa setting him up both times. If Freiburg fail to stop their tango,expect lots of goals.

5th-placed Leverkusen will welcome league-leaders Bayern to the BayArena, in a crucial match for both sides. Leverkusen will need a win to keep step with Gladbach, and Bayern would love to extend their lead at the top of the Bundesliga table.

What This Could Mean: Three points could move Leverkusen up to 3rd, depending on what happens on Friday, and in Leipzig’s match, which kicks off simultaneously. A win for Bayern would extend their lead at the top to 10 points, that is, obviously until Dortmund play.

Last Results: Leverkusen just edged past Freiburg last weekend with a 0-1 victory. Bayern, on the other hand, thrashed Fortuna Düsseldorf 5-0 on Saturday.

Player to Watch: Robert Lewandowski – I know I’ve said it a lot of times, but I’ll say it again – This man is simply the best striker in the world right now. It doesn’t matter if you play with the best team in Germany, or for your local Sunday League team, the dimensions of the goal stay the same. And this man always manages to guide the ball into the net. He got a brace last weekend, and you can only expect more goals from him.

3rd-placed Leipzig will play against bottom-club Paderborn in the Red Bull Arena, with the hosts keen to stay hot on Dortmund’s heels with 3 points.

What This Could Mean: A win for Leipzig will take them up to 2nd, although only until Dortmund play. As for Paderborn, they seem down and out, but a win could move them within 6 points of safety. But if results don’t go their way, they could be 12 points away from 15th place. And will surely spell the end for them.

Last Results: Leipzig scored 4 against Köln on Monday, and conceded a couple for good measure. Paderborn, sadly, were on the receiving end of a 1-6 thrashing from Dortmund.

Player to Watch: Angeliño – The player on loan from Manchester City was absolutely all over the left-wing in the aforementioned win against Köln. His crosses were pretty devastating too. Paderborn don’t seem to have anyone as quick as him on their right, so he will certainly cause lots and lots of problems.

16th-placed Fortuna take on 7th-place Hoffenheim, with the home team in desperate search for three points to boost their survival hopes. The visitors, though, will not be a pushover, as they need a win to fuel their quest for European football.

What This Could Mean: Düsseldorf could jump out of the relegation zone if they win or draw, and Mainz lose. As for Hoffenheim, they could go up to 6th with a win.

Last Results: Fortuna travelled to the Allianz Arena last week, and they returned beaten and bruised, as the Champions put 5 past them. Hoffenheim’s win over Mainz was the only positive thing for Fortuna last weekend, but they won’t be looking to return any favours.

Player to Watch: Kenan Karaman – He was Fortuna’s sole striker, and most of the time, sole attacker against Bayern, and even though he couldn’t make things happen there, he is in fine scoring form, with 5 goals in his last 6 Bundesliga games. If he is able to get past the Hoffenheim defence, I bet he’ll net a couple of goals.

11th-placed Frankfurt will welcome 15th-placed Mainz to the Commerzbank-Arena. Frankfurt go into this match after winning a relegation six-pointer, but Mainz are still in the thick of the battle.

What This Could Mean: The Eagles could soar all the way up to eighth with a victory (and a few favourable results). Mainz, though, need to win by 7 goals too change their spot, and they cannot afford to lose either, as that could see them drop as low as 17th place.

Player to Watch: Filip Kostić – Though Stefan Ilsanker (of all people) got a brace after coming off the bench in midweek, Kostić was his side’s best player, as he set up the opener and patrolled the left flank. A similar performance will see the likes of Awoniyi and Bote Baku questioning their decision to play in this match.

Saturday’s late kick-off sees Runners-up Dortmund take on high-flying Hertha, who are 9th in the table currently. Dortmund will need the win to keep Bayern honest, whereas Hertha would like 3 points to spur on a late European push.

What This Could Mean: Dortmund can go within 4 points of Bayern if the league-leaders lose to Leverkusen. On the other hand, Hertha can close in on a European spot with a win, which see them go 8th, and only a point behind their European dream.

Last Results: Dortmund hit Paderborn for 6 last week, and won by a margin of 5 goals. The capital side also managed to win, 2-0 against Augsburg

Player to Watch: Jadon Sancho – The young Englishman has taken the Bundesliga by storm this season, as his second-half hat-trick last weekend saw his tally go up to 33 goal-involvements in the Bundesliga. He will surely look to add to that.

2nd-bottom club Bremen face 6th-placed Wolfsburg on Sunday’s early kick-off. The hosts will be eager to get three crucial points to boost their chances of survival, whereas the visitors would want the points to cement a European spot.

What This Could Mean: A win for Bremen might see them jump out of the relegation zone, if Fortuna and Mainz lose. As for Wolfsburg, maximum points will help them keep 6th-place, and potentially open up a three point buffer if Hoffenheim lose.

Last Results: Bremen lost 0-3 to Frankfurt in midweek, so their extra game in hand yielded no points. The Wolves also fell prey to Frankfurt, 1-2 in the weekend.

Player to Watch: Davy Klaasen – The midfielder was very threatening in his side’s defeat in midweek, and he will look to materialise his attacking threat against Wolfsburg.

14th-placed Union face 10th-placed Schalke at the Stadion An der Alten Försterei. The hosts can move within 3 points of the visitors with a win, but Schalke will desperately be looking to end their streak of 11 games without a win.

What This Could Mean: A victory can help Union move up a place, and dispatch any relegation fears. If Schalke can go away with three points, it would be their first win in 12 games, and could take them back up to 8th.

Player to Watch: Rabbi Matondo – The Welshman has been a bright spark for his side throughout their poor run of form. He lacks goals though, and might want to get some against a leaky Union defence.

13th-placed Augsburg host Köln, who are a place above them for the final game of the weekend. The teams can go level on points if the hosts win.

What This Could Mean: Three points for Augsburg won’t see their position changed,but as previously mentioned, it will take them level on points with Köln, who could jump up to 10th with a win.

Last Results: Augsburg lost by 2 goals to Hertha last weekend, as they failed to score. The Billy goats got a similar result on Monday, as they last 2-4 to Leipzig.

Player to Watch: Anthony Modeste – With Jhon Córdoba out with an injury, the Frenchman will probably lead Köln’s attacking line. He has 2 goals in 3 matches (both off the bench), and will look to showcase his scoring ability right from the beginning. Be sure to look out for his acrobatics.

A spicy weekend of the Bundesliga awaits. Be sure to watch the matches, and stay tuned for the Match Reports.