Bayern travelled to Leverkusen – to the BayArena, looking to extend their lead at the top of the table. The away side also had good reason to fight for the points – a win would see them leap over Gladbach, who slipped up yesterday, and put them in 4th place with a 3 point buffer. It was set up to be a spicy affair. 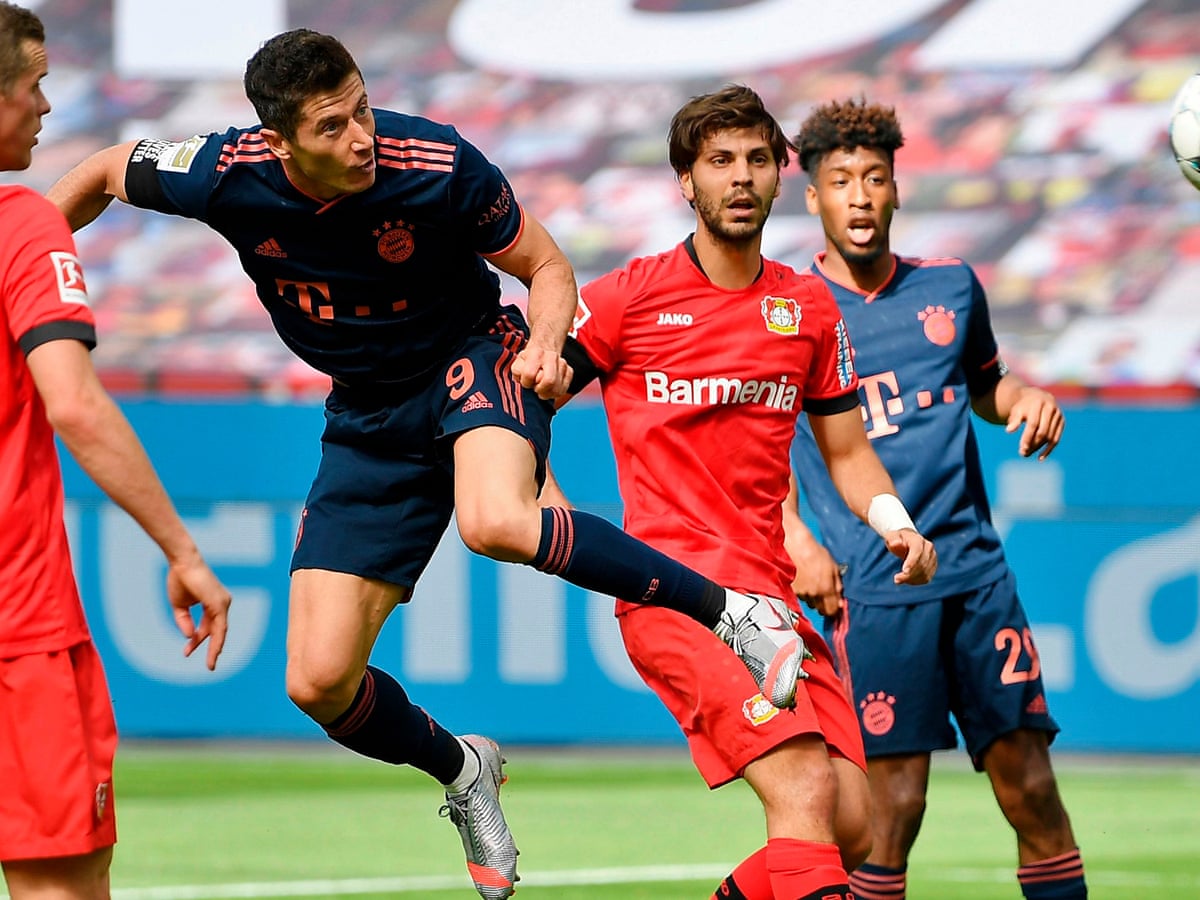 The first half was open at the start, as both sides pressed hard.

But 10 minutes in, Alario was able to go through on goal after Baumgartlinger played him in, and he slotted it past Neuer to give his side the lead.

Bayern stepped up a gear after the goal, and after creating a few chances, Coman was played through into an acre of space by Goretzka, and the Frenchman calmly finished.

The champions went ahead too, when Goretzka started a counterattack after a Leverkusen corner. The former Schalke player was on the end of Müller’s pass, and he managed to beat Hrádecký, whose outstretched hand failed to stop it.

Gnabry went through on goal just before the break, but he only managed to draw a save from Hrádecký.

But he made up for it in less than a minute, when he chipped Kimmich’s delightfully lofted ball past the keeper, to double his side’s lead.

The second half saw more of the same, and in the 65th minute, Müller managed to find Lewandowski with a beautiful cross, and the striker scored with a thumping header.

Late on, two of the Leverkusen substitutes combined, as Demirbay passed the ball to Wirtz on the edge of the box, after which the 17 year-old cut to his left for, and slotted it past Neuer, becoming the youngest-ever Bundesliga goal-scorer.

Fittingly, it ended 2-4 to the Champions.

Both sides looked to press high. Bayern’s counter-press was effective too, but Leverkusen thwarted that by using diagonal balls to switch play.

As always, Bayern’s wingers interchanged flanks quite often, which caused lots of problems.

Leverkusen switched to a back 4 at half time, because the back 3 was tormented down the wings.

In the end, it was the superior pressing from Bayern which settled the match.

Amiri vs Coman (and Davies) – Amiri was made to look like a middle-schooler by the two speedsters, but you can’t really blame him considering the fact that he chiefly is a creater, and not a defender.

Lukáš Hrádecký – Could have done better to prevent Bayern’s second goal, but he made up for it when he repelled Gnabry’s shot. 6.5.

Edmond Tapsoba – Solid at the back, as he repelled lots of crosses. 6.75.

Sven Bender – Decent in defence, but he failed to do much to prevent the goals. 6.25.

Aleksandar Dragović – Not bad down the right, but was embarrassed by Coman a few times. 5.5.

Nadiem Amiri – Tried his best but had no chance of holding out defensively against Coman and Davies. Couldn’t do anything going forward either. 4.75.

Charles Aránguiz – Battled very hard in midfield to keep his side afloat, but was mostly overrun by Kimmich and Goretzka. 6.

Julian Baumgartlinger – Goṭ an assist for the first goal when he flicked it through for Alario. Decent in midfield thereafter, but failed to do much. 6.

Leon Bailey – Played at left-wing back, and couldn’t do much going forward or defensively. His diagonal balls were decent, though. 5.5.

Karim Bellarabi – Threatened down the right, but his control let him down. 5.25.

Lucas Alario – Fielded in place of the injured Havertz, and he fulfilled his role well, when he scored in the 10th minute. Failed to do much thereafter, though. 6.25.

Moussa Diaby – Made a loose mistake which led to the equalizer. Apart from that, he made a nuisance of himself thanks to his pace, but he lacked end-product. Very selfish at times too. 4.5.

Kerem Demirbay – Failed to create anything since he came on, except the assist he got for Wirtz’s goal. 5.25.

Wendell – Decent at left-back, but failed to make much happen up front. 5.

Florian Wirtz – Tried to make things happen, but was contained by Davies. Got a brilliant goal late on, though. 6.25.

Team: Leverkusen started off very very well, but were bossed by Bayern thereafter. They failed to create too much in attack, but they did look to pass their way through Bayern. They didn’t succeed, but credit to them for sticking to their style. 6.

Manuel Neuer – Had very little to do for most of the game, but he did his trademark sweeping whenever he had to. Won’t be happy about conceding two, but it was not his fault. 6.5.

Benjamin Pavard – Good down the right, as he kept Diaby quiet. Forayed forward often as well. 6.5.

Jérôme Boateng – Solid at the back, and his distribution was great too. 7.

David Alaba – Made a poor mistake early on which allowed Alario to go through and score. His chipped balls to play the forwards through were on-point, though. 7.

Alphonso Davies – The roadrunner was everywhere in defence, as he made lots of blocks and interceptions. Threatening in attack too. 7.25.

Joshua Kimmich – Did very well in midfield, as he drove his side’s attacks. Got a brilliant assist for the third too. 7.25.

Leon Goretzka – Orchestrated his side’s moves from midfield. Dominated defensive midfield, and he got a deserved goal and assist as well. 8.

Serge Gnabry – Was a nuisance down the right, as he went through a couple of times. Scored a goal to make up for missing a great chance. 6.75.

Thomas Müller – Brilliant in attack as always, and he bagged two brilliant assists. 7.5.

Kingsley Coman – He was lively on either wing, and he did well to take his chance and make it 1-1. Created lots of trouble due to his pace. 7.5.

Robert Lewandowski – Kept quiet for most of the game, but even then then he managed to score. 6.75.

Team: Bayern showed great character to bounce back from a goal behind, as they took all of the big chances they created (bar one). It was a dominant display from the Champions, and now they can certainly see the Meisterschale in their hands. 7.25.

Manuel Gräfe didn’t have too much controversy to handle, but he did his job well. 7.

Returning Players – It was great to see Thiago and Volland back from injury.

Bayern go 10 points clear at the top, but that lead could be reduced to 7 points after Dortmund play. Either way, they look set to get their hands on a record eighth-consecutive Bundesliga title.

Leverkusen, though, have missed the chance to go three points clear of Gladbach in 4th place, as they stay 5th due to a lower goal difference.