Mainz hosted Augsburg at the Opel Arena, with both sides looking for crucial points to get out of the relegation battle. 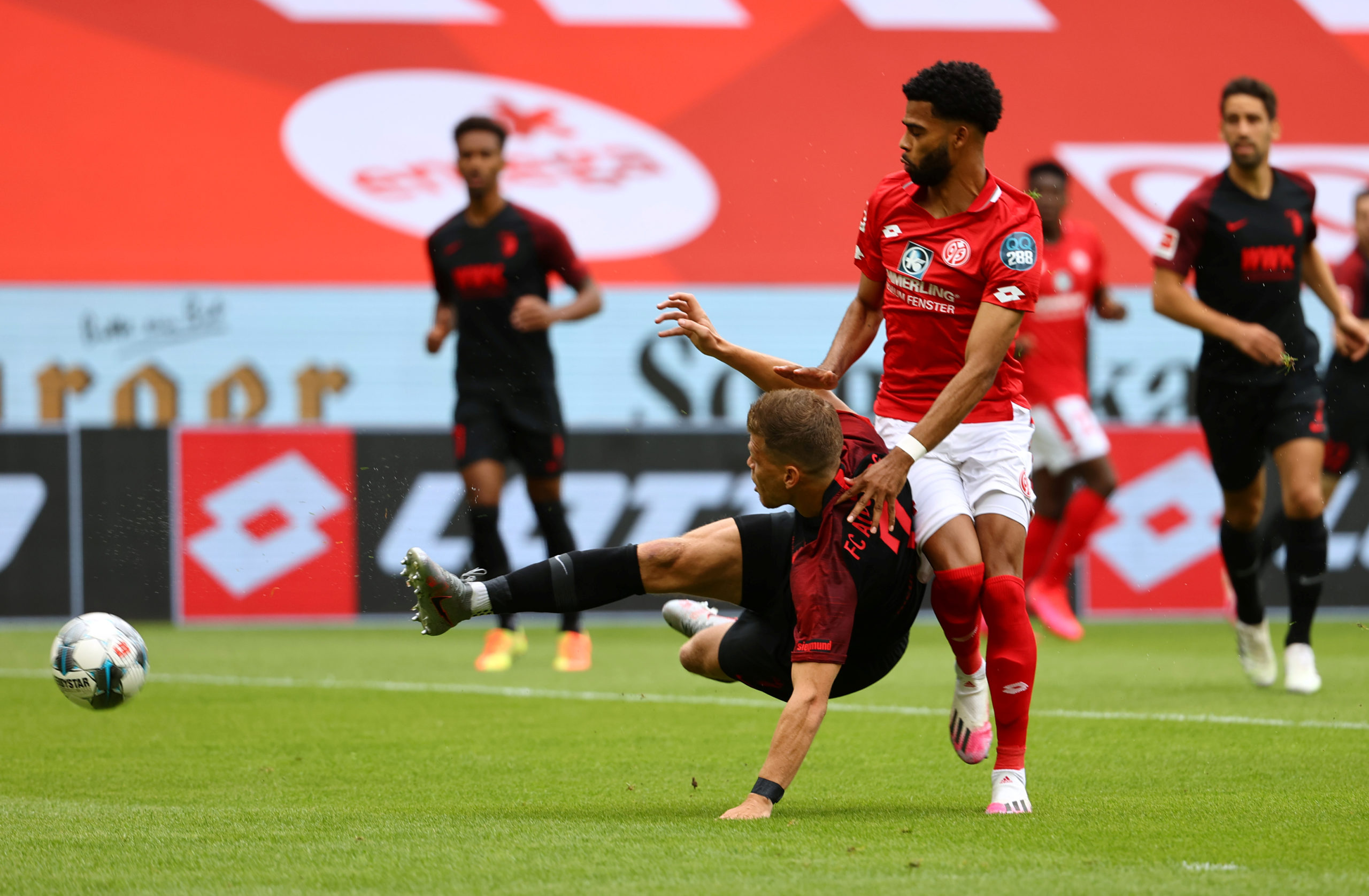 It was a lightning start for Augsburg, as Florian Niederlechner broke his goal-drought with an improvised finish when Gruezo’s header fell to him in the 41st second.

In the 39th minute, Quaison played Mateta through. The Frenchman rounded the keeper, but his finish was loose, and kept out by Max.

There was another big chance for Mainz four minutes later, when Öztunalı was played through on goal, but it was swept away from him by Gouweleeuw. He managed to roll it for Onisiwo though, but the Austrian was kept out by Luthe.

Mainz pinned Augsburg in their own half for almost the entirety of the second half, but they failed to create any major chances, and so it ended 0-1 to Augsburg.

Nobody will know what the original instructions were for both sides, because the early goal threw their initial gameplans straight out of the window.

Mainz looked to play a lot of long balls for the first half hour, and were highly unsuccessful. Afterwards, they started looking for through balls and played through midfield, which was relatively vacated by Augsburg.

Both sides also held out for opportunities to counter, but there was nothing to be had there.

The match was a highly physical affair too, as Öztunalı and Max picked up head injuries, and Awoniyi was knocked out of the match.

Mainz switched to a back-four at half-time, after starting with three defenders.

Nicolai Müller – Didn’t have too much to do after the goal. 5.75

Phillipp Mwene – Decent at the back, as he did well to contain Vargas. 6.25

Jerry St. Juste – Rather caught napping before the early goal, but was good thereafter. A major threat from corners too. 6

Moussa Niakhaté – Good at the back, especially aerially. 6.5

Daniel Brosinski – Got into good positions in attack, and put a few good crosses in. His corners looked threatening too. 6.75

Leandro Barreiro – Not too bad in midfield, but his passing and decision-making was rather poor at times. 4.75

Danny Latza – Did well in midfield, as he put in a lot of challenges and moved the ball around well. 6.5

Levin Öztunalı – Saw a lot of the ball and delivered a few crosses as well, but most of them were sub-par. Found himself in good positions too, but his decision-making let him down. 5.25

Robin Quaison – Played a few incisive passes from midfield, and created a couple of good chances. 6

Taiwo Awoniyi – Picked up a really unfortunate head injury in the 17th minute. He was taken to a hospital, where he was conscious and speaking. We hope that he is alright. Failed to do much before that though. 5

Jean-Philippe Mateta – Had a major chance towards the end of the first half, and arguably could have done better to convert it. 5.5

Jean-Paul Boëtius – His passing was decent after coming on, but he failed to make an impact at the sharp end. 6

Ridle Baku – Alright at right-back, but he couldn’t do anything up front. 5.75

Karim Onisiwo – Had a massive chance in the 43rd minute, but his finish was unconvincing. Failed to have a major impact. 5

Andreas Luthe – Made a few massive saves to earn the clean sheet. 7

Raphael Framberger – He was decent down the right, but he failed to have too much of an impact on either end of the pitch. Almost got sent off though. 5.5

Jeffrey Gouweleeuw – Made a few massive tackles at the back, and kept things tight. 6.75

Felix Uduokhai – Battled hard in defence, as he won crucial headers and made a few important blocks. 6.75

Philipp Max – Battled hard on the left flank. Threatened in attack with his pace, and was solid defensively and aerially too. Made an important clearance off Mateta’s shot too. His set-piece deliveries were loose though. 6.25

Rani Khedira – Looked rather unconvincing in midfield, as his passes went astray and he was beaten by his Mainz compatriots. 5

Carlos Gruezo – Got a half-fortunate assist with a looping header, but he certainly won’t mind. Failed to do much in way of attack, but was good at the back. 6.25

Noah Joel Sarenren Bazee – Kept relatively quiet for most of the match, as he failed to stretch his legs too often. 5.5

Marco Richter – He was decent in midfield, but failed to have a major impact on either end. 6

Ruben Vargas – Looked good in attacking midfield, and threatened the Mainz goal a couple of times. Saw a lot of the ball, could have done better at times though. 6.75

Florian Niederlechner – Finally got a goal with a slightly lucky finish, but he won’t complain about that. Failed to do too much thereafter though. 6

Tin Jedvaj – Kept things tight at the back after coming on. 6

Alfreð Finnbogason – Failed to create anything, as he saw very few glimpses of the ball in attack. 5.25

André Hahn – Battled down the right, but failed to do anything on either end. 5.75

Eduard Löwen – Decent in the middle of the park, but failed to do too much up front. 5.5

Team – Augsburg got a smash-and-grab goal in the first minute, and defended resolutely thereafter. Their defence was only breached one or two times, and Luthe bailed them out. A classic battling performance from them which you would totally associate with a side fighting for relegation. They are probably safe now. 6

Marco Fritz had a very physical match to officiate, but fortunately, there were no terrible fouls. So, his job was relatively easy. 7

Mainz stay 15th and remain 3 points clear of Düsseldorf who are in the relegation play-off spot. They still have a lot to do to ensure survival.

Augsburg on the other hand, move a place up to 13th, and are level on points with Union and Köln who are either side of them.